How a personal trainer can benefit from Olympic lifting

Not so long ago, it was unusual to see cleans, clean and jerks, and snatches being done at the average gym. However, with the rise of CrossFit and sports performance-focused training, more and more people are now performing these Olympic lifts.

There are a number of benefits that your personal training clients can reap from Olympic lifting. Here are some of them:

Power is scientifically clearly as:

This equation is simply broken down as power being the capability to display strength in conjunction with speed.

The Olympic-style exercises are great for enhancing this power. Compound movements such as, for example, squats and deadlifts are important foundational exercises that can assist with building towards a person’s power output. The reason why you want to build power as this force makes you more efficient and strengthen fast-twitch muscle fibres.

Jumping strengthens fast-twitch muscle fibres that help you perform explosive movements. If you perform a jump slowly it is unlikely that you will leave the ground. Olympic lifts assist by mimicking the fast contractions that our bodies need to make in order to rapidly move ourselves and other weight against gravity.

Increased jumping ability as well as increased power are referred to as starting strength which enables us to make use our muscles and bodies in order to create enough force or power to push off a surface so propelling our bodies quickly and effectively.  As people get older, they see an age-related decline in lean muscle mass and also quickly see a reduction in power production. Therefore they see a reduction in starting strength. So if you want to be able to get out of a chair in your later life without using your hands and arms for help it’s time to consider exercises for power and speed to increase your starting strength.

Olympic lifts are becoming extremely important exercises in many high-intensity workouts. This is because the exercises are really effective at assisting the exercisers to burn fat and build lean muscle simultaneously. Olympic lifts involve using a variety of different muscle groups. This type of exercise also engages a lot of large muscle groups in a short space of time. It thus assisting with yielding the best caloric expenditure.

Just as with the more basic compound movements, Olympic-style movements consist of a lot of core stability as well as strength. It is well known that the core powerhouse is the foundation that all of the strength – in the entire human body – is built on. In addition, the core helps to keep the body upright and assists with keeping the body balanced.

Strength and balance are both are tested and trained when you perform Olympic lifts. The reason for this is the complex, powerful movements that this sport requires in addition to the angles and placement of the bar (weight). Your core powerhouse is so much more than just the strength in your abdominals. Your glutes, lower back, and obliques all are sources of core strength and stability. Olympic lifts engage your entire body because these require strict form and sequence in order to optimise power production.

Don’t feel pressured to get into Olympic lifting. If you are on the fence when it comes to this type of exercise modality find an exercise that truly tickles your fancy because if you enjoy doing it you’ll stick to it. How a personal trainer can benefit from foam rolling 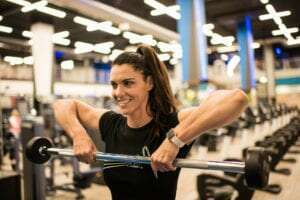 How being fit helps to fight depression