Why men lose fat faster than women do

If you’ve ever embarked on a diet with your husband or boyfriend, you’ll know all too well that – even though you are eating the same (if not less) than he is – the fat just melts off him. The reason for this is not just because men are just lucky enough to have this happen. In actual fact, there is scientific proof to back it up.

It’s a physiological fact that men have more muscle mass than women do. The more lean muscle mass that a person has, the more calories they burn while at rest. This means that men have a double fat-burning advantage over women because they’ll burn fat while exercising and, at the same time, when they are sitting behind their computers.

We all have fat stores in our body. These perform particular functions such as protecting the vital organs in our bodies such as our intestines. Men possess more visceral fat than women do. This is found around their midsections. When they lose this fat, their metabolic rate – in other words their ability to burn fat and calories – increases.

Conversely, women have more subcutaneous fat. This is situated around their hips, thighs and rear ends. Subcutaneous fat assists a women’s body during the process of child-bearing as it ultimately helps to protect the growing baby during pregnancy. Unfortunately, losing this type of fat doesn’t make a difference to your fat-burning capabilities as subcutaneous fat is not metabolically active. In other words, processes associated with your metabolism don’t happen in subcutaneous fat. All is not lost, ladies!

Yes, unfortunately, owing to scientific reasons men to indeed lose fat faster than women do. However, this doesn’t mean that women need to throw in the towel and resign themselves to the fact that they can’t lose weight as fast as men do, which means that they won’t even try. Women just need to put in a bit more work to shape up and sign up to become a personal training client.

The best way to stimulate the weight-loss process is to visit a personal trainer in conjunction with advice from your dietitian or nutritionist. Doing resistance activities – such as lifting weights and Pilates – will help you to develop the lean muscle mass that you need in order to increase your metabolic rate and start burning fat and calories at rest. Don’t believe us? One pound of muscle – which is about 45 grams – burns about 6.5 calories per hour. So when you start adding on the pounds of muscle, you’ll be turning your body into a calorie-burning machine!

To further stimulate muscle development, eat a protein-rich mean after every meal. There are fabulous supplements on the market – such as whey protein – which allow you to get all the protein you require in a great-tasting shake. If you want to be a bit more traditional, cook up some hard boiled eggs to eat after your workout. At 13g of protein in 100g of hard boiled eggs, these pack a mean protein punch!

We’ve heard the line from some women which goes something like this: “But if I lift weights, won’t I bulk up? I don’t want this. All I want is a well-toned body!”

Yes, there are some female bodybuilders out there who do have muscle definition very much like that which men do. However, they’ve consciously gone about developing this type of look for themselves and have taken specific supplements to help them look this way. They ‘ve also put in many, many hours at the gym to help them develop this type of physique.

Adopting a moderate weight-training programme won’t make you bulk up. As we’ve said previously, men and women’s bodies are designed in a fundamentally different way. A male body is designed to have bulky muscle while a woman’s isn’t. So banish any fears you may have of weight training developing bulky muscle. Unless you specifically set out to make this happen, it won’t.

Unfortunately, men do lose fat faster than women do. However there are ways for ladies to shed those unwanted centimetres. They just need to go about it in a way to suit their physiological make-up. As we’ve said, the good news is that women can lose weight too by adopting a number of weight-loss principles.

If you want to learn more about this, or become a personal trainer yourself, check out Trifocus Fitness Academy’s bespoke range of personal training courses. 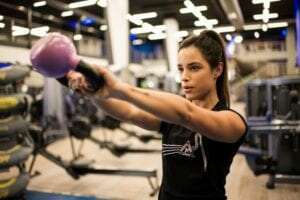 What is fitness? Find out more in this article.

The Real Power of Pilates