Will Eating Sugary Foods Before an Event Hurt the Athlete’s Performance?

Ask most people this question and you can bet their answers will range from of course it will, to is that a trick question? However, the answer isn’t as clear cut as one might think.

Like many things, the answer to whether or not sugary foods have detrimental effect on an athlete’s performance depends on the type of sugary food consumed, how long before the event it is consumed, and how much of the food is being consumed at a time. Let’s take a closer look at the types of sugars in food. We’ll also discuss which of these might or might not affect athletic performance.

Types of Sugars in Food

There are five types of sugars found in foods. Each of these offers an athlete both benefits and drawbacks.

Found in dairy products primarily, lactose is a type of sugar that is broken down in the small intestine and converted to, among other things, glucose. This type of sugar gives you the energy you need when you’re doing physical activity such as exercising. Glucose molecules enter the bloodstream and travel to power up the muscles.

This one’s not commonly found in most foods. You’ll find it in beer and molasses. Maltose is broken down into two parts glucose in the small intestine. As is the case with lactose, this glucose is absorbed into the blood stream to give energy to the muscles.

Found in most kitchens across the world, sucrose or ‘table sugar’ is found in a lot of food – like brownies, cookies and other baked goods. Sucrose breaks down into equal parts glucose and fructose. These are absorbed through the small intestine wall and taken to muscle cells or stored for later use.  If you take in too much sucrose, this could be one of the leading contributing factors to weight gain. This sugar is commonly found in fruit, honey, and vegetables. Processed by the liver before being sent via the bloodstream to the muscles, fructose breakdown produces free radicals and triglycerides (a type of fat).

Glucose is a simple sugar found in many foods, including bread and pasta. It is a monosaccharide, which means your body burns it most efficiently. Glucose passes directly to the bloodstream without it having to be metabolised in another organ.

Which Sugars are Best Before an Event?

So, back to the sugary food and whether or not it’s a good idea to eat them before an event. Let common sense prevail. If an athlete eats a bunch of starchy food just before an event, he’ll have that meal in his stomach while performing which will hamper his or her performance. On the other hand, one small koeksister or doughnut (chewed properly) won’t make much of a dent.

If an athlete wants to munch before an event, they should ideally be drinking or eating high-glucose foods. Try wholegrain crackers or toast with a smear of nut butter for a healthy pre-event snack. This will ensure fast absorption into the bloodstream and oodles of energy when exercising. If your stomach can handle it, wash your pre-event snacks down with some milk for an added energy boost.

Looking to dive further into the fascinating world of nutrition and how the foods we eat affect our bodies? Our Trifocus Fitness Academy Sports Nutrition Course is just the course for you. Explore the course on our website under the COURSES tab, and contact us today should you have any questions! What Are Electrolytes and Why Do Athletes Need to Worry About These? 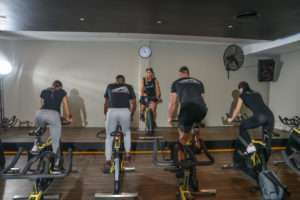 Do you Wear Special Shoes during Spinning Group Exercise Classes?