Getting started with kettlebells: The hip hinge

The hip hinge is a fundamental movement around which the majority of kettlebell movements are based. This includes the swing, clean and snatch.

What are the biomechanics of the hip hinge?

The hip hinge starts with a break in the hips with them shifting to the posterior while maintaining a neutral spine. The knees will break a little to allow for counterbalance from the torso. As the hips shift to the back there will be a natural forward lean from the torso in order to keep the centre of balance over the mid-foot which is the ideal position.

Once the initial movement is completed the person will return to the starting position by contracting the hamstrings, glutes and lower back while maintaining a neutral spine position. At the end of the movement, there is a powerful contraction of the glutes but not a hyperextension of the lower back and hips. The neck should maintain a neutral or slightly extended position during the entire movement. By extending the neck slightly you can better activate the muscles of the posterior chain which will transfer into the upcoming ballistic movements.

How to teach the hip hinge

The two easiest methods of teaching the hip hinge are the wall touch and the dowel rod method:

Have the client initiate the hip hinge movement while maintaining contact with all three points:

If you feel back pain during any part of this movement, stop what you’re doing and check your form. You may need to modify or decrease how far you hinge at the hips. If the pain continues, discontinue the exercise and talk with your doctor or a physical therapist before trying it again.

Want to find out how to teach other kettlebell exercises to clients? If you do then you need to study our Kettlebell Course. For more information, please follow this link. What does a nutritionist do? 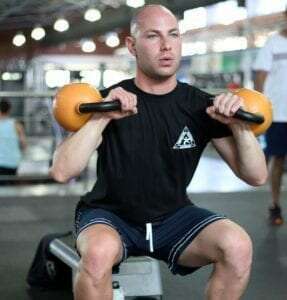 What is a good beginner’s weight for kettlebells?