How to perform the push-up fitness assessment

There are several variations of the push-up test, with differences being seen in:

The possible equipment required during the push-up test include a:

The procedure for a push-up test

A standard push-up beings with the hands and toes touching the floor. The fitness participant’s body and legs must be in a straight line with their feet slightly apart and their arms shoulder-width apart. The shoulders must be extended and at right angles to the body.

Keeping the back and knees straight, the fitness participant will lower his or her body to:

The next movement will be returning back to the starting point with the arms extended.

This action continues. The test is repeated until exhaustion or until the fitness participant can do no more in rhythm or has reached the target number of push-ups.

How to do a modified push-up test

Inhale and bend the elbows. Lower the chest to 90 degrees at the elbows. Exhale and push up so that the arms are straight. Make sure that the elbows aren’t completely locked. Attempt doing two sets of between 10 and 12 repetitions.

If the fitness participant can’t go to 90 degrees at the elbow, tell them that they need to just go to a comfortable position until they can work up to 90 degrees.

The push-up works the chest, triceps and shoulders.

Want to learn more about fitness and exercise? If you do and want to make this your career, then you should really become a personal trainer. To find out the best method of doing this, you need to check out our Personal Training Diploma. Follow this link to find out more. How to exercise safely 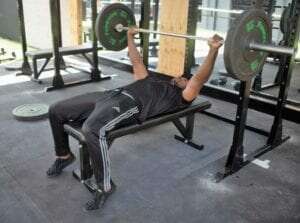