What Are The Benefits Of Battle Ropes?

Battle ropes are rapidly becoming one of the biggest fitness trends. For those who are not acquainted with this piece of equipment, they are thick ropes which are either looped around a pole or anchored with a strap. You can utilise these ropes for individual exercises, as a finisher, or complete an entire battle rope training routine.

This method of training was invented by John Brookfield, who is a multiple world record holder in various strength and endurance activities. Brookfield tested battle ropes with professional athletes as well as NFL players, who really struggled to maintain a steady pace after several minutes. He claimed that this was due to them missing a specific kind of endurance that only battle ropes are able to train.

Jumping as well as skipping are classic calorie-burners however they’re not the only exercises that you can perform with a rope. The secret weapon – in terms of torching fat, improving your metabolism and sculpting muscles – is amping up the weight-factor with a battle rope.

Often eyed-up anxiously at the other end of the gym, this thick, heavy length of rope can be incorporated into your training routine with confidence. Utilise them correctly and the benefits of battle ropes are anything but basic.

Get A Full Body Workout With Battle Ropes

One of the most apparent, yet important, benefit of battle ropes is that using them will provide you with a full body workout. Getting a full body workout is something that we could all do within this day and age, where getting to the gym for an hour or two is often difficult.

Some people believe that battle ropes are purely for arm and shoulder workouts, however, that’s not the case. These ropes can be used to target the body as a whole in spite of literally being a piece of rope.  With a range of movements as well as exercises being used in a short space of time, you may attack every part of your body with battle ropes just as well as you can during other full body techniques of training.

One of the best battle ropes advantages, for those looking to lose weight and get lean, is that they are an amazing method of burning fat. Tired of sweating away on the treadmill for 45 minutes in vain? Battle ropes to the rescue! If you consider it, fat is burned via the process of building muscle. You won’t build a lot of muscle running on the treadmill for extended periods of time. In fact, you might even lose some.

As battle ropes is a strength-centred exercise, as well as being cardiovascular, you’ll burn twice the amount of fat as you would slugging away at long-duration cardio. You’ll also burn this fat in half the time!  The best approach to burning fat would likely be battle ropes HIIT, but that’s not to say that a low-impact exercise won’t assist you to achieve your goals.

If your normal workout routine is becoming increasingly stale, you need to consider using battle ropes. They are fun to use and provide an efficient workout for developing lean muscle mass, burning fat as well as improving your fitness levels.

If you want to learn more about how to incorporate battle ropes into a workout then you need to do our Battle Ropes Course. For more information, please follow this link. 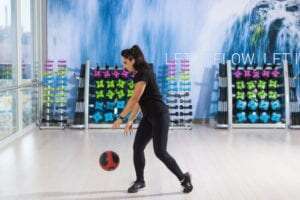 What Are The Benefits Of CrossFit? Find out more.