Why is iron so important for athletes?

As an essential mineral, iron is found in every cell of the body. Its main role is to transport oxygen in the blood to the tissues. This essential mineral ensures that our muscles are working properly. It also helps the body convert carbohydrates into energy when we exercise. While the body is recovering from strenuous bouts of physical activity, iron helps us to produce the following:

We lose minute amounts of iron when we sweat. This puts endurance athletes, such as long-distance runners, at risk of being deficient in iron. Without enough iron, athletes can’t use oxygen properly to produce energy. This impairs any athlete’s ability to compete to the best of their ability.

A common problem for iron-deficient athletes is the inability to maintain a steady heart rate during moderate to vigorous exercise. Female athletes – as well as those athletes who don’t eat meat –  must eat well-balanced meals. In addition, they must eat snacks before and after they train. Female athletes often suffer from iron deficiency. Studies have routinely found that they are often iron-deficient or anaemic.

A mixture of the these factors puts athletes at risk for being iron deficient:

Symptoms of Iron Deficiency and Anaemia

The symptoms of iron deficiency include loss of endurance, chronic fatigue, high exercise heart rate, low power, frequent injury, recurring illness, and loss of interest in exercise and irritability. Other symptoms include poor appetite and increased incidence and duration of colds and infections. Many of these symptoms are also common to over-training, so misdiagnosis is common.

The only sure-fire way to diagnose if an athlete is suffering from an iron deficiency is to perform a blood test on them to see if they have the correct levels of iron. If you are in one of the risk categories for iron deficiency and are experiencing any of the symptoms listed above, we recommend that you consult your doctor.

What foods are high in iron?

Here are a number of examples of food which are good sources of heme iron:

Nonheme iron can be found in:

Want to learn more about sports nutrition? Check out Trifocus Fitness Academy’s Sports Nutrition Diploma to find out more! For more information about this and our other online fitness courses, please visit our website. 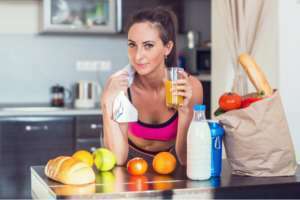 Why do you need vitamin B in your diet?