What is The Difference Between Slow Twitch and Fast Twitch Muscle Fibres?

Why is it that some people are best at running marathons or cycling for hours but can hardly perform a box jump? Ever wondered why others can jump very far or high, or sprint exceptionally fast, but cannot run very far? Well, the difference lies in the make-up of their skeletal muscle, specifically their muscle fibres.

A Muscle is Made Up of Various Muscle Fibres

In turn these are made up of many fibrils. Skeletal muscle fibres are identified as:

How Do Muscle Fibres Work?

During aerobic exercise, slow-twitch muscle fibres are the first to be contracted and engaged. Generally, because slow-twitch fibres can provide their own source of energy, the endurance of slow twitch-fibres is high so we are able to perform exercise at a steady state for some time.

However, slow-twitch muscle fibres cannot generate large amounts of force. Once these become fatigued and the force becomes too much for them to handle, fast-twitch fibres are recruited and engaged. These then take over. Aerobic exercise increases our level of fitness, stamina and the muscle’s oxygen capacity. This allows the body to burn energy for longer periods of time.

Fast-twitch fibres are broken down into two categories

What Type of Workout Engagages Which Type of Muscle Fibres?

Aerobic exercises, bodyweight exercises with high repetitions and resistance training with lighter weights may all engage the slow-twitch fibres in the muscle, allowing you to increase your fitness and endurance.

Determining the amount of slow and fast twitch fibres that your muscles are made up of will assist you in understanding the type of training you need to do to reach your goals. A simple fitness test should give you an indication of the makeup of your muscle fibres after which you will be able to implement a suitable training regime. Want to know more about how to develop a training regime? Trifocus Fitness Academy’s Personal Training Certification will help you get there! Click here for more information. 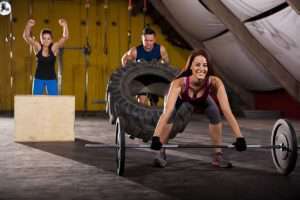 The Right Way to do Crossfit Training 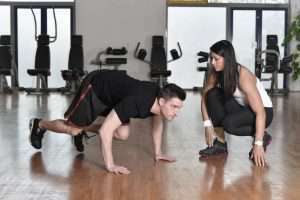