What are prime mover exercises?

In relation to health and fitness, the term ‘prime mover’ refers to a muscle, or group of muscles, that is most in charge of a particular motion of a joint. For a number of joints, there are just a pair of prime mover muscles. However, other joints can have several prime movers and this depends on the motion. In fitness, the concept of prime mover muscles is important as, when performing an exercise, it is vital to know what the prime mover muscle of that exercise are. This is  as it will be the one getting the most powerful workout.

Which joints have the most prime mover muscles?

Joints that include rotation as part of their capabilities tend to have a greater number of prime mover muscles as opposed to those with a lot less forms of articulation. For instance:

‘Agonist’, in relation to muscles, refers to a movement in which the muscle(s) provides the major force to complete the movement.  In the bicep curl, which produces flexion at the elbow, the biceps muscle is the agonist.  In every exercise, the agonist is not the muscle that is shortening (contracting concentrically).  In a bicep curl the bicep is the agonist on the way up when it contracts concentrically as well as on the way down when it contracts eccentrically.  This is because it is the prime mover in both cases.

The antagonist doesn’t always relax and another function of this muscle type can be to slow down or stop a movement.  This could be seen if the weight used in the bicep curl was very heavy. In this instance, when the weight was being lowered from the top position the antagonist tricep muscle would produce a sufficient amount of tension to assist with controlling the movement as the weight is lowered down. This assist with ensuring that gravity doesn’t accelerate the movement so causing damage to the elbow joint at the bottom of the movement.  The tricep becomes the agonist and the bicep the antagonist when the elbow extends against gravity for example in a push up, a bench press or a tricep pushdown.

There are a number of prime mover exercises that we do every time we hit the gym. To help you get the most of your workout, we thought that we’d give you some hints and tips about how to do the tricep pulldown correctly.

There are several variations to this exercise such as using an E-Z bar attachment as well as a V-angled bar or straight bar.

For more information about exercising and becoming a personal trainer, follow this link. What is the cardiorespiratory system? 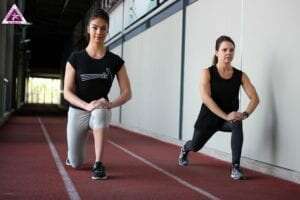